Potato Growers Looking to the Future 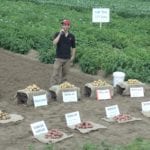 Twenty potato growers from all over the Wisconsin converged on Madison last week for their annual “grill the professors” ritual. They came from Eagle River to Spring Green and Coloma to Plover and grow for fries, chips, fresh market and seed. It’s an eclectic bunch,… The Wisconsin Potato and Vegetable Growers Association (WPVGA) is working on expanding in-state sales and recognition of Healthy Grown potatoes – certified as  ecologically grown, socially responsible,  and ecosystem friendly – and they taste great – what a bargain! This promotion was made possible thanks… Taints Wisconsin’s High Capacity Wells by Brian Sikma, Media Trackers1  Regulatory confusion resulting from state Supreme Court decisions and the Department of Natural Resources is creating headaches for users and owners of high capacity wells in Wisconsin. Across the state farmers, employers and municipalities use… Striving for sustainability, particularly in the marketplace, is something most people desire but what exactly does it mean? Sustainability is a process of producing something that balances the environmental, societal and economic needs for the good of everyone. Here at New Family Farm, we understand…

Remote Technologies – Will drones change the face of agriculture? Officially, we call them Unmanned Aerial Vehicles (UAVs) but that’s too confusing with all the SUVs, ATVs and UFOs out there–so we just call them drones! They are already moving into every part of our lives from real estate to tourism, sales to sports, even… UW Study Shows Agriculture Generates $88.3 Billion and 413,500 WI Jobs By Steven Deller, UW-Extension/Madison Community Development Economist EDITOR’S NOTE: This article is taken from a 2014 press release by UW-Extension/Madison. At a time when agriculture is facing escalating pressure from environmental groups and increasing…

As the Crow Flies The Impact of Irrigation By Ruth Faivre, Managing Editor Back in the day, before irrigation started in the 1950s, today’s lush Central Sands Region farm acres were nothing more than dry, dusty ‘prairies’ because the sandy soils could not retain moisture. Area residents used to…